What is Dynamic Positioning?

What is Dynamic Positioning? 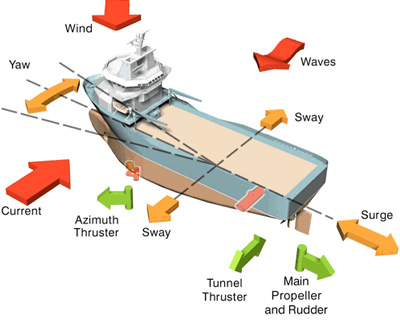 When calculating and comparing the vessel’s heading and position to the desired position, the dynamic system can determine if any positioning error has occurred and apply the required thruster action necessary to reposition the vessel.

Basically, what a DP vessel does is hold its place against wind, waves and current by propellers which are commanded by computers taking signals from satellites, sonar and compass. It is used in very deep waters, where anchoring is impossible.

In the past this was achieved through analogue systems but now this fully integrated computer and electronic systems are pretty common.

The dynamic positioning system and equipment is mainly used in the offshore industry and can be found on board of vessels which require precise positioning.

DP vessels do not refer to a particular type of ship as any ship can install DP equipment and get itself DP classed if it complies with the classification societies requirements.

II. What is the purpose and how does it work?

The Dynamic Positioning’s main purpose is keeping a vessel in a specified position by controlling the propulsion system and allowing it to perform operations such as drilling or production operations (FPSOs) without changing its position despite the wind, waves and other factors.

Without the DP System, drilling or production operations wouldn’t be possible in deep waters because, due to the ocean currents or wind, the movement can cause a lot of damage and can stop production, causing money loss and costly repairs.

A vessel, as well as any other object, has six freedoms of movement called roll (its movement from side to side in the water), pitch (a ship is lifted at the bow and lowered at the stern and vice versa), yaw (rotation of the ship around its vertical axis), surge (the ship’s motion along the its longitudinal axis, front to back), sway (the linear lateral, side-to-side motion) and heave (the linear vertical, up/down motion). The heave, sway and surge are translation movements and roll, pitch and yaw are rotation movements. The DP controls these translation movements. It also calculates the difference between the wanted and the present position and then leverages the propellers to reduce this difference as much as possible. All this is made using minimum fuel and tear of the propulsion system.

In order to use a Dynamic Positioning system, the vessel has to have a number of well positioned thrusters or powered propellers throughout the vessel. Usually, a conventional mono hull-type DP vessel has six thrusters; three at the bow and three aft. Forward thrusters tend to be tunnel thrusters, operating athwart ships. Two or three tunnel thrusters are usually fitted in the bow. In order to maintain the vessel’s position from every direction, these thrusters and propellers are located on the front and back, as well as on both sides of the vessel.

The information about the position of the vessel is communicated from special sensors on the ocean floor as well as from satellite, weather and wind information which are transmitted to the Dynamic Positioning system.

By combining this knowledge with the sensor information, the computer can calculate the required steering angle and thruster output for each thruster. The DP operator sees the computer output and makes the necessary movements to keep the vessel steady.

The DP allows operations at sea where mooring is not possible due to the deep water, congestion on the sea bottom caused by pipelines, templates etc. or other problems.

Dynamic positioning can be absolute when is locked in a position fixed to a fixed point over the bottom or relative to a moving object such as an underwater vehicle or a ship. The ship can also be positioned at a favorable angle towards wind, waves and current. This is called weathervaning.